The Maple Syrup Festival, on March 24 and 25, was held at the North Park Village Nature Center in northwestern Chicago.  The nature center is 46 acres with wetlands, woods, 2.5 miles of trails and a large visitor’s center with permanent and temporary exhibits.  A volunteer from a local herpetological society had brought in turtles for attendees to learn about, see and touch.

In 1915, the site was part of the Municipal Tuberculosis Sanitarium that was built for specialized treatment of tuberculosis patients.   Dr.  Theodore Sachs and the Visiting Nurses Association were proponents of the creation of tuberculosis sanitariums where people could receive specialized care and be isolated.  During this time in Chicago and suburbs, the Edward Sanatorium in Naperville, Chicago Winfield Sanatorium, West Side Dispensary and Chicago Municipal Tuberculosis Sanitarium operated to house and treat patients.

The Municipal Tuberculosis Sanitarium finally closed in the 1970s and the 155-acre complex, the buildings and grounds, was converted into three adjoining facilities: senior housing, a school for people with disabilities and the nature center.  There is also a chapel, community garden and recycling center on the grounds.

Following the photographs is a recipe for maple syrup marinade. 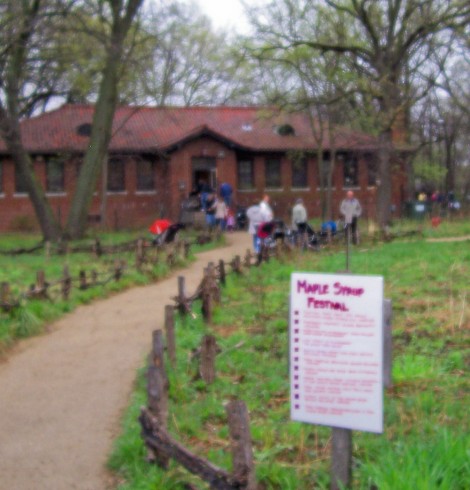 The Peterson Park building used as a school on the complex and festival volunteer.

The trees were in bloom along the paths. 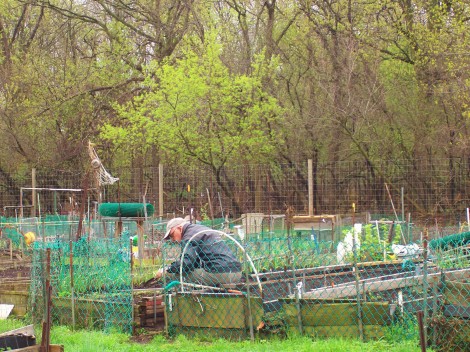 I asked the gardener about the community garden. He told me that people add their name to a waiting list to get a spot in the garden. He was working on this patch. It’s surrounded by fencing to keep out the rabbits and deer.

The Peterson Park building used as a school on the complex and festival volunteer.

The trees were in bloom along the paths.

Mix it together in a bowl.  Pour over poultry or fish (salmon or trout) or seafood.  Marinate for two to four hours and cook as desired.  For a glaze, simmer it over medium heat until it becomes syrupy.  Use the glaze for ham, lamb or poultry.  Enjoy.

One response to “About the Nature Center – Part II”