I was at a flea market with friends slowly strolling between the booths and tents containing antiques, collectibles, crafts and everything in between.  When I stopped at a tent with tables filled of vintage advertising memorabilia and a small box filled with old photos and postcards.  The old photos and postcards caught my eye.

I like looking at old photos that offer a snapshot into another time and place.  They are a small photogenic piece of history, and sometimes provide good ideas for taking pictures.  The old pictures were really inexpensive, okay cheap.  Some of the photos were old sepia toned images taken in the southwest.  They were of men and women in cowboy hats riding horses and a church in a town.  I couldn’t resist it and purchased them for a couple of dollars.

Then I hit the Internet to find out more  about the images in the photos and I learned about Mexican style rodeo culture, history and customs.    If you want to ride back in time with me for a few minutes, here are images of the southwest in sepia tone and some information on them: 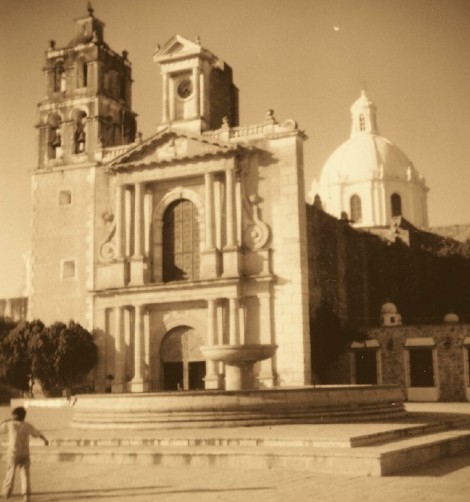 A large cathedral, has a bell tower and clock tower, in a central square.  There was no writing on the photos to describe a location or time.  The style of building looks Spanish colonial and ornate.  It looks like a large square and the white-domed building of a government building.  Perhaps the city center is filled with people shopping at a nearby outdoor market and children playing in the square.

I think the photo is from a Mexican rodeo that is called a charreada.  The sporting tradition came over from Spain in the 16th century.  Just like other North American style rodeos in the US and Canada, it is a competitive sporting competition to showcase the skills of ranchers and ranch workers.  The cowboy, dressed in boots and chaps, swings his lariat high in the air as he gets ready to rope.  I see dust kicked up by the horses in the dirt dry arena.  Other cowboys sit on top of gates watching the event.  It looks like a place high in the mountains in an arid desert region.

The three women riders dressed in light ruffled dresses with ribbon sashes and large cowboy hats are escaramuza or skirmish riders in a precision equestrian team.  They ride side-saddle or albarda.  This is a tradition carried down from the Mexican revolution when the lovely ladies would be decoys to trick the government soldiers.  The gutsy adelitas used their fancy dresses and riding skills to trick and evade the Federales, army.

“The immediate antecedent of the present Escaramuzas were the Adelitas, or “women of the revolution.”  Tradition holds that women on horseback were decoys during the Mexican revolution. The women would ride off to raise a cloud of dust so that the Federales were deceived into thinking an attack would come from that direction. The revolutionaries would then attack from the rear.

The women in the escaramuza are mounted “a mujeriegas”, that is, in an “albarda” or sidesaddle that is peculiar in style to the Charrería but the underlying design has also evolved over hundreds of years in both Europe and North Africa. The traditional albarda for the Escaramuza is a cut down charro saddle, with a leather seat and leg braces, U-shaped for the right leg and C-shaped for the left leg.”  Charreada on Wikipedia

For the price of a couple of dollars, I saw people performing at a local rodeo somewhere back in time in the southwest or Mexico; and learned about a rodeo culture and customs passed on from a revolution and earlier–including the daring women riders in the ruffled dresses.

10 responses to “Images of Southwest in Sepia Tone”