A voyage through space is the ultimate concept and adventure travel.  I’m combining two photo challenges, Sunday Post: Concept and Travel theme: Circles, with photos of real equipment and models of it used in the planning and exploration of space.

December 7th is a significant date in American history.   One reason is because December 7th was the 40th Anniversary of the Apollo 17 launch, which was the last lunar landing.   The last man to walk on the moon was Eugene Cernan.  He was a shutterbug as well as an astronaut.  He might have taken some great photos on the moon, but he left his camera behind.

“I left my Hasselblad camera there with the lens pointing up at the zenith, the idea being someday someone would come back and find out how much deterioration solar cosmic radiation had on the glass,” the BBC quoted Cernan as saying.  “So, going up the ladder, I never took a photo of my last footstep. How dumb!  Wouldn’t it have been better to take the camera with me, get the shot, take the film pack off and then (for weight restrictions) throw the camera away?” he said.

I think if I was walking around on the moon I might get excited and forget my camera too.  In honor of Cernan’s last lunar trek and 40th Anniversary of Apollo 17; I visited the Cernan Earth and Space Center with my camera.  But I didn’t forget it there.  I’m adding a surprise at the end of the post for photography and space enthusiasts.

The photographs were taken at the Cernan Earth and Space Center, in Illinois, that houses a collection of equipment, photos and information on loan from the Smithsonian National Air & Space Museum in Washington, D.C.  It also has a planetarium for sky shows and astronomy.

The Cernan Center came into existence because of a local guy, Captain Eugene Cernan, who went to school in Maywood, Ill.  He liked hunting, fishing and science, and flying.  He was very good at science and flying; receiving a degree in engineering, becoming an experimental test pilot and earning the Navy’s Distinguished Flying Cross.  He flew multiple missions in space on the Gemini IX, Apollo 10 and Apollo 17, and spent 73 hours trekking and exploring the moon.

He was definitely a high-flyer and adventure traveler.  Get ready to blast off and view the space theme photos: 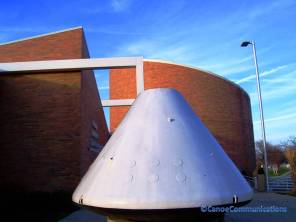 The surprise?  It turns out that Cernan wasn’t the only astronaut that liked photography and taking pictures from space.

The Gateway to Astronaut Photography of Earth features photos from  space; and collections of  images of volcanoes, cities and glaciers from space.

Now, I can see images of space and earth every day, even if I can’t achieve lift off.